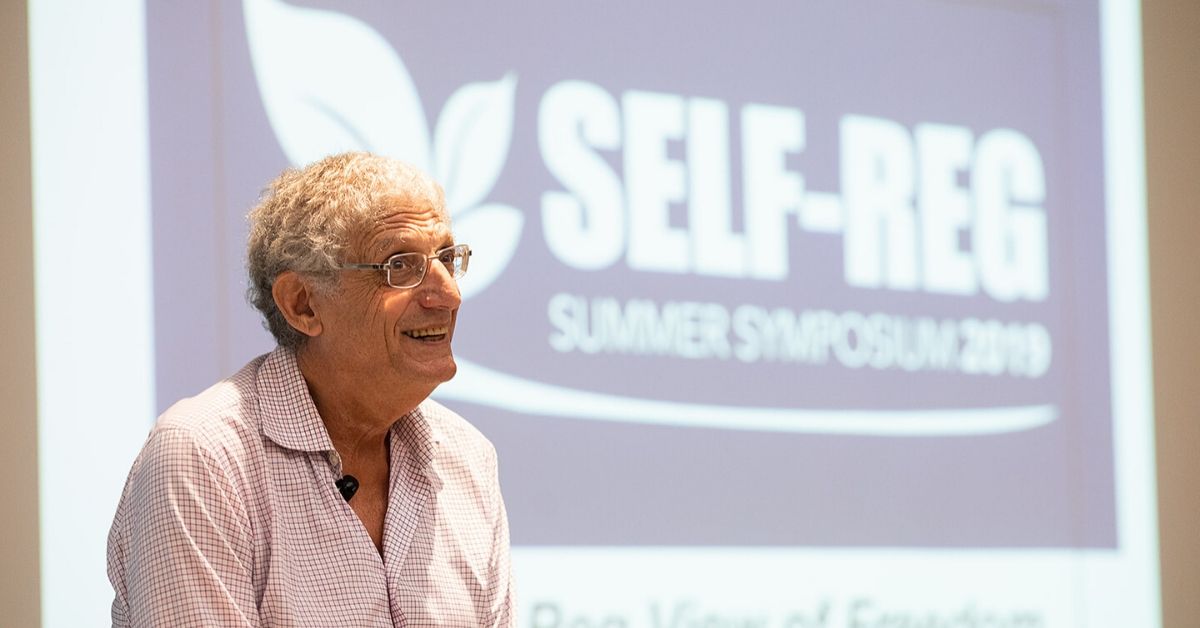 Four years ago, I was following a Twitter feed that literally changed my career and my life. I started seeing people posting tweets with photos of slides from a man talking about stressors and behaviour and reframing and something called Self-Reg.

And I wondered, who is the presenter and why have I never heard of him before?

He was literally talking about the science behind what I’d always believed. I never believed my students came to school purposely trying to ruin my day. But when you just believe this and you don’t have the science or research behind the beliefs, everyone just thinks you’re being easy on people.

So I followed up on finding out who this was and soon found myself reading his work, following him on Twitter, and signing up for a conference where he was speaking.

And then the most amazing thing happened because I discovered The MEHRIT Centre and their very first Self-Reg Summer Symposium. Everyone who was there had discovered Stuart and his work and were there to learn more. By the time I finished the four days there, I was convinced that signing up for the online Foundations courses was the thing to do even though at that point the syllabus hadn’t even been announced. Here, almost three years later, I’m still studying with Stuart through the MEHRIT Centre.

We started applying what I was learning in my school. Now we had the science to back up our way of working with students. Things were transforming for kids but it was slow. Partway through Foundations, the members of our cohort had a eureka moment. We realized that we needed to be bringing Self-Reg to the adults in our building. And when we did, things started to change much faster.

Although I was being a good student of Self-Reg and was applying it in my professional life, I wasn’t getting it right in my personal life. I wasn’t managing my energy and tension and I got really sick. My body had been keeping score and I was losing.

I never gave up studying Self-Reg and in fact, I was working on my Foundations courses from my hospital bed. And that’s when it happened. I realized I needed to be applying Self-Reg in my personal life as well. Stuart and Susan were incredibly supportive throughout that time and really helped me get that missing piece figured out. Applying Self-Reg personally turned my life around completely and I was on the road to recovery. I’ve gone from barely making it to thriving every day.

Stuart says “Self-Reg always works.” He’s right. He also says it is never too late to change a person’s trajectory. Oh, how right he is. That is the hope that Self-Reg provides.

Almost every person I have studied Self-Reg with, either as a cohort member or as a student in one of the courses I was facilitating has reached the same point. They usually start studying Self-Reg for their work or professional lives. Some start because they have their own children who are presenting challenging behaviour, but in the end, almost every single one reaches the moment where Self-Reg changes their own trajectory.

Two summers ago, at the Self-Reg Summer Symposium at Trent University, I got invited on stage during one of Stuart’s sessions to chat with him about Self-Reg in schools. It was like being invited to come up on stage with your guitar to jam with your favourite rock star. It’s an experience that I will never forget.

I spoke to someone at our Toronto Self-Reg events who commented on Stuart’s rockstar status with many of us. He’s not loud and ostentatious like your typical rocker but his effect on his audience holds similar appeal. He’s actually pretty unassuming. He doesn’t make a big production about all of his knowledge and sometimes you have to listen intently to catch what he has to say. He always makes sure you leave your time with him with lots of new learning and a long list of new books and research papers to read if you’re so inclined — I added three more to my list yesterday. Many of us have had to buy larger bookshelves or Kindles with larger memories to hold all the books he references with ease. And he always challenges us to make a difference in the lives of others by practicing and modeling Self-Reg, but is forever reminding us that no one is a perfect Self-Regger and that even he has times when he isn’t perfect in his practice.

Stuart has made such a big difference in the lives of so many people at various ages and stages. Personally, Stuart taught me to turn the Self-Reg lens that I was so good at using for others, and to look at myself through that same lens. He taught me to recognize my stress behaviour for what it is and to better manage my tension and energy using the 5-steps of Self-Reg. He reminded me that it’s never too late to change your trajectory by recognizing your stressors in all 5 domains and working to reduce or remove some of them. He taught me to stop beating myself up for past stress-based behaviour that for so many years I tried to manage through a self-control mindset. And he taught me to recognize calm, which was a concept I’d long since forgotten and helped me to understand that for me the feeling of calm was actually quite aversive at first but that was OK. And finally, he taught me to bring activities and experiences back into my life that restore me and fill up my tank.

Self-Reg has been a life-changing experience for me. Many of my co-learners on this path have experienced similar things. Stuart says: “Self-Reg changes people’s trajectories. Self-Reg always works.”

It is my distinct honour to thank Stuart Shanker for the profound impact he has had in my life.

Cathy Lethbridge has been an educator for over 30 years. In addition to her work with TMC Cathy works as Principal of Well-being in an Ontario School Board. Her current focus is the application of Self-Reg in the lives of adults and how this positively affects their own lives as well as the lives of children and youth in their care.