How Many Children in the Dramatic Play Centre? 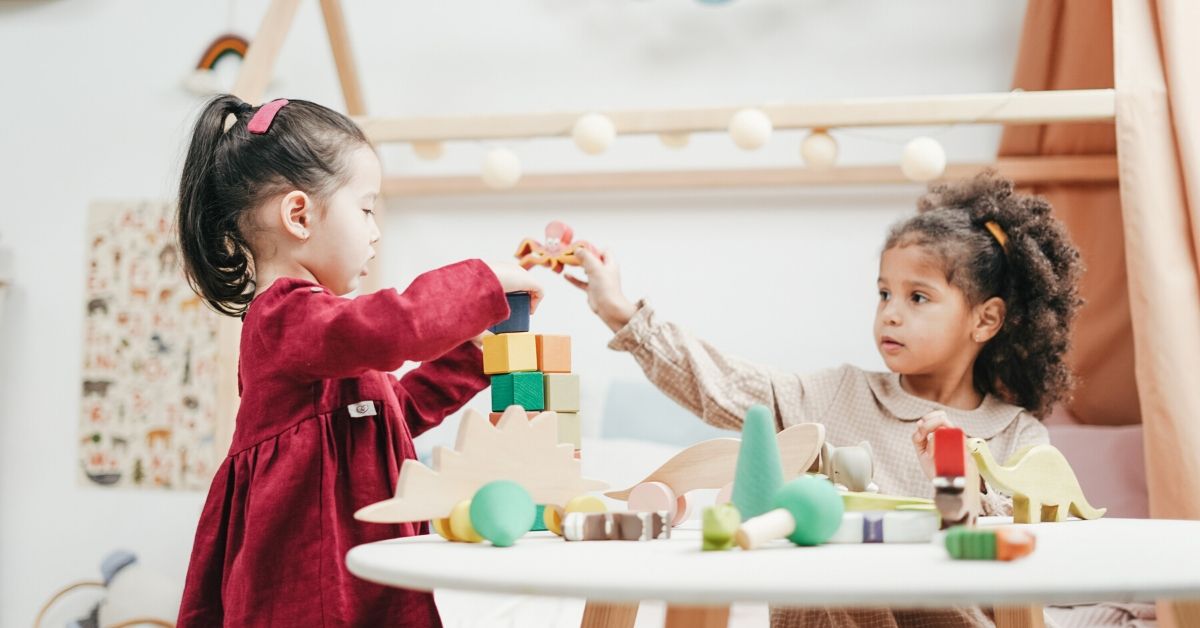 When I first began teaching kindergarten many years ago, my teaching partner and I spent the summer setting up the classroom with a wide variety of learning centres – block play, dramatic play, water table, book centre, playdough table, and so on. Once the classroom was ready for students, I went to our board’s media centre and cut out lots of teddy bears from laminated blue bristol board and brought them back to the classroom. There were two smocks for the water play table, so we posted two bears there to indicate only two children could play at the water table. Three chairs and three placemats fit perfectly at the play dough table so three bears were posted at the play dough table. Four chairs around the table in the dramatic play centre, so we decided four students would be a good limit for that centre and up went four laminated little bears.

When the students began school, my teaching partner and I explained to the students about the bears and how many students could play in each centre. If there was no room for them to play at a centre, we discussed what they could do instead: choose another centre, wait for a turn. But what happened was that students would be engaged happily in play until someone noticed that they had strayed over the limit. Five students would be contentedly playing in the dramatic centre, then suddenly someone would realize there were more kids than teddy bears.

Student: There’s five people in here and there’s only supposed to be four! He has to leave. He got here last. He can’t be here.
Student 2: She’s had a long turn…
Educator: It seems like you were all able to play in the house centre with five people. We’ll let Student 2 stay and we’ll have five people in dramatic play today.

Instead of engaging in play and conversation with students, observing and documenting their learning, my teaching partner and I found ourselves policing the number of students at each centre. After a month or two, we realized it was time to rethink our practice. We removed the laminated bears and talked with the children about being safe in the classroom – what might that look like or sound like in each centre? And then we held our breath and waited to see what would happen.

Quickly, the children took ownership of managing the number of students at each centre. A wonderful example of how well students could manage and negotiate the learning centres and spaces occurred when the students were presented with an exciting new dramatic play opportunity. The dramatic play centre had been transformed into a Burger King by our high school coop student with trays, food containers, fake food, a cash register and other materials. (Note: this was many years ago. Now we would co-create the dramatic play centres with the children). Not surprisingly, after our morning meeting, a very large group of children descended upon the dramatic play centre. We waited and watched, wondering if we should intervene.

At our closing circle that day, we talked with the students about how popular the dramatic play centre had been and the strategies we saw them using. We asked them how we could make sure that everyone who wants a turn would be able to have one, and they decided to use a clipboard, paper and pencil to create a sign-up sheet. In the past, my teaching partner and I would have determined how many students were allowed in the dramatic play centre, we would have chosen a strategy for ensuring everyone had a turn if they wanted one, and we would have missed out on giving our students the opportunity to develop and demonstrate their self-regulation skills.

Looking back on this shift in dramatic play in our classroom through a Self-Reg lens, I can see how students were able to choose a learning environment that felt safe for them. Some students were very comfortable in the seemingly crowded dramatic play centre on Day One of Burger King. Other students found this too stressful – whether from the noise of so many students engaged in play at once, the lack of space caused by so many bodies in a small space, the social and prosocial demands of engaging in play and negotiating the use of play materials with so many classmates, or a combination of these and other stressors.

When my teaching partner and I created the size limits in the centres at the beginning of the school year, we focused on the size of the space and the amount of materials available for students based on our perceptions of what we would find stressful. We didn’t consider that when students are highly engaged in play, they may be comfortable in what we would regard as a stressful, crowded space.

In our classroom, removing arbitrary limits on the number of students at each centre reduced stress for students and educators. We could focus on engaging in learning with the students, not counting how many students were at each centre. Students could select centres based on their own needs, strengths and interests, as well as their comfort level with the size of the group at the centre rather than adhering to our predetermined limits.

Lisa Cranston has over thirty years of experience as an educator in Southwestern Ontario. She spent the last eleven years of her career in education as the educational consultant for kindergarten and primary grades, leading the implementation of Full Day Kindergarten for her school board from 2010 – 2015. Now retired, she is an online course facilitator for the MEHRIT Centre. Lisa believes that Shanker Self-Reg® has changed how she views both her own behaviour and that of others, and her goal is to help others to ‘lend their calm’ to those around them.