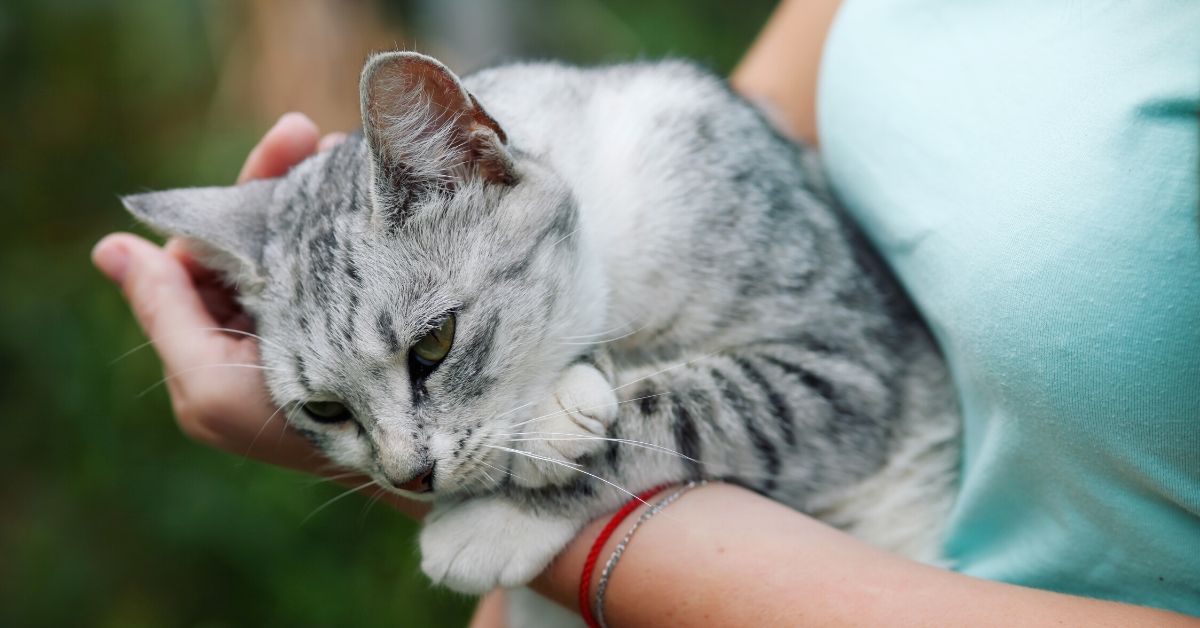 “Sarah”, I called out again while following the sound of faint kitty cries barely audible through the fence to my neighbour’s yard.

The temperature was 370C and with the humidity it was well into the 40’s. I was worried when Sarah hadn’t come home all day in the heat and was doing a bit more kitty calling than usual. Maybe it was a sense that I had that something wasn’t right; hard to say.

A fight-or-flight stress response was about to hit high gear.

The desperate meowing was coming from the center of several stacks of long thin patio stones waiting to be laid in my neighbour’s backyard. I thought Sarah was stuck in the pile somehow so I sprang to my neighbour’s front door and knocked hard. No answer. My heart racing, I ran to the back again and began searching only to realize – with a shock – that buried within the fortress of stones was an animal trap and Sarah was locked inside.

I quickly freed her and took her home shaking, hot, dehydrated and dirty. She’d clearly been inside the steel cage for a long time. She had no water and it was the hottest day of the summer. I shudder to think what might have happened to my little girl’s cat if I hadn’t heard her crying.

But at least Sarah was safe. I’d go see the neighbour the next day to let them know what happened. I knew there were raccoons in the area and that could explain the concealed animal traps. But was there more to this? Why did I feel so uneasy? A sore stomach, tension all over, a ruminating mind all added to the upset I felt. I recognized the signs of a stress response so clearly and although I was not enjoying the feelings, I remember thinking about its biological purpose: when Sarah needed saving the limbic system took the reins. I acted quickly and got her home to safety.

But the real story took place the next day. For all my so-called knowledge of self-regulation and time spent learning about, practicing and teaching the Self-Reg Method…. well it went out the window when I needed it most.

Here’s what happened: I knock on my neighbour’s door. I know his wife some. She’s kind to my daughter (who happens to be away while all this has happened, thank heavens). But I don’t know him, I rarely see him. He’s now looking at me hard in the eyes. My voice is quivering a bit, it’s one of those “time stands still” kind of moments. I tell him what happened. He’s uncomfortable, but not apologetic. He explains to me about the raccoons and how they are digging up his yard and his roof. He didn’t expect anyone to find the traps (yeah, there were two) but he feels fully justified in owning them. The tension was thick and it was awkward. I have no idea what I was expecting but it was certainly for him to say something. He doesn’t, he just stares. I ask about my cats… what I want to know is if it happens again and he finds Sarah, will he let her go? It turns ugly. It’s a blur really – my head is spinning and words are coming out of my mouth and it’s like I am not thinking them, they’re just – splat— there and making it worse. My eyes well up at his coldness.

He verbally pounces. He hates my cats and any cat he traps will be “gone.” His aggression is building. I am in shock. I just stare. I can’t believe how mean he’s turned. Is this really happening? Now he is calling me stupid and a tree-hugger, daring me to let my cats wander into his yard again. I am in tears trying to reason with him, asking if my cat gets trapped if he would please just let me know, if not for me for my little girl. His wife has been so kind to her, gave her a box filled with items to make her own fairy garden… how is this happening? He tells me to stop trying to manipulate him with my “crap”. He slams the door and as he does I hear myself telling him, “I feel sorry for you.”

I go home knowing I am off the charts in my stress state, knowing that I handled it all wrong, unsure of how on earth this happened, feeling sick to my stomach, shaken and scared. My little neighbourhood that I’ve called home for a year now suddenly felt unsafe in so many ways.

In the blink of an eye I now had several problems (and MANY stressors from all 5 Self-Reg domains):

As I sit here two days after this all began I am struck thinking of how huge a problem this seems and yet how incredibly small it is in the big picture of things. The daily onslaught of horrific news; an election circus to the south that has the whole world worried that the wrong outcome will make our planet less safe; and people, so many people, hurting everywhere.

How does my situation with a neighbour upset over a cat in his yard have any place in the big worries facing every one of us?

We have an excessively stressed society and its ripple effects are finding their way into our neighbourhoods, our schools, our families, and our own lives. Peace for me is about being safe and feeling safe. It’s havens, it’s looking at the well-being of others as central to the well-being of all. It’s caring, curiosity, and it’s love – love for those similar to us and love for those who seem different. We are all sharing the same human experience, operating from the same brain-body systems. These differences that divide us, that we think separate us, are really just illusions. Some of us have had a better shake in the hand we were dealt. I wish that were different, but I know we can still do more today. All of us need to feel connected and safe. Let’s start there. The opposite of peace in my mind is fear: disconnection, protecting of “mine”, blaming, threatening of “yours”. If you live in fear, you can’t find peace. Fear is grey, painful, lonely, and a place where limbic systems can easily be triggered and more ugliness can seep into our world.

Am I saying that my neighbour just needed compassion from me and all would be well in the world? Well, no. His response was aggressive and I am right to take it seriously. But it’s interesting to think about the kind of world I want to live in and want my daughter to grow up in. I want peace in my relationships, in my home, and in my neighbourhood.

I want to wave a magic wand and turn our world into a HAVEN, a safe place for everyone. When I say everyone, I mean it. Everyone. I believe it’s possible and I believe that the science that is unveiling deeper understandings of stress, the stress cycle and self-regulation is the key to not just the well-being of ourselves and our families, but of our community and our world.

My neighbour was in full stress response yesterday. He doesn’t like my cat going to the bathroom in his yard. I get it. He probably has more stressors in his life going on that I don’t know about. Maybe if I hadn’t pushed him on this or leaked out so much emotion things wouldn’t have escalated.

I am not saying this is my fault. It’s not. He still scares me, but we are all strung so tight with the state of our world and the aggression streaming into our lives every day. Stuart talks a great deal about limbic resonance, right brains reading right brains. My neighbour’s brain was scanning for safe and danger and I was danger. His brain was also reading the distress in my limbic brain. We were both dysregulated and, as a result, we were further dysregulating one another.

How do we shift our world?

There’s only one way: we strengthen our interbrain connections, those multi-modal communication channels for genuine relationships. We find soft eyes for ourselves, for others, and we do this even when it’s really hard to find it within ourselves. We make it safer to be different, to disagree, to talk about problems, to be curious, to ask for help. We try to understand others through their lenses, not ours. Cat shit is a problem for some people. What if I started there, would the outcome be any different? I’ll never know, because my fear of the worst got the best of me. My limbic system was running the show when I knocked on that door. What if I had done a little Self-Reg first. Could I have been more aware of my stress and calmed myself before going over. Would I have approached the situation with softer eyes? Would I have been able to notice the “why and why now” that I needed to see when the tension began to escalate?

What if those of us who know Self-Reg committed to practicing a little bit of Self-Reg with one another in every single interaction we have for one day? One week? Would my cats be safer and my neighbourhood relationships a little healthier? Would it bring a little more peace to the world? He called me a tree-hugger so maybe the idea is not so far off: I am going to call myself a Peace-Hugger for a week and see what happens. You with me?