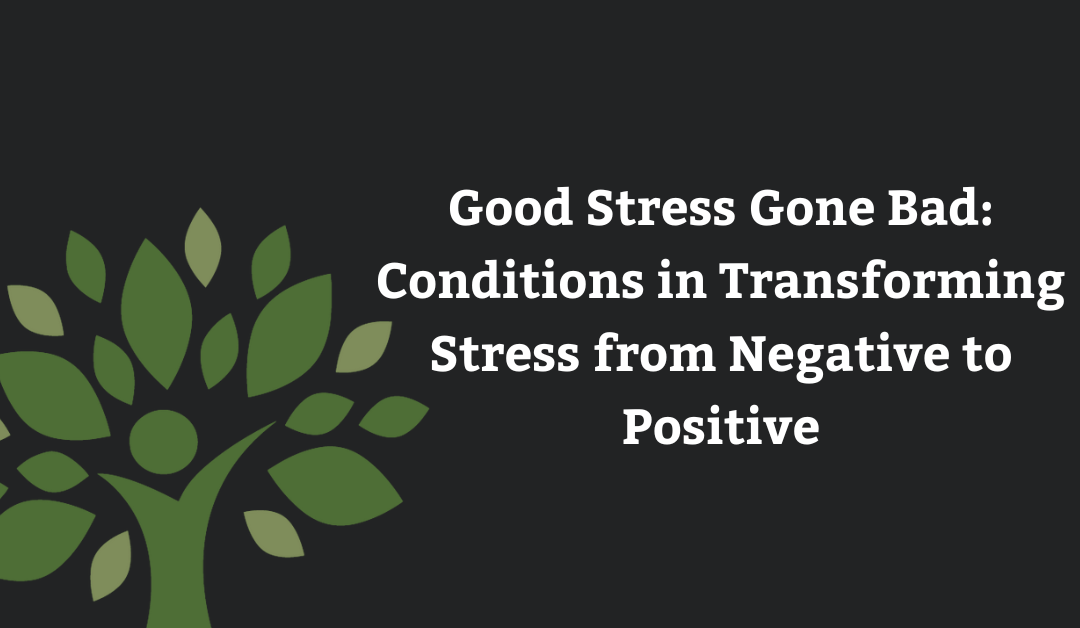 This article was published as part of Reframed: The Journal of Self-Reg Volume 1, Issue 1 (2017)

One of the basic precepts of Shanker Self-Reg® is that one’s level of energy and tension is critical for whether a particular stressor is experienced as positive or negative. This energy/tension state is largely a function of one’s overall stress load. Accordingly, the better we can manage our stress across five domains – biological, emotion, cognitive, social and prosocial – the better we can maximize positive arousal and performance.

Ever since Yerkes and Dodson (1908) published their “law” that performance improves with arousal but then deteriorates past a midpoint if arousal continues to increase, psychologists have sought to understand how we can manage arousal so as to maximize performance. The issue here is stress: How much is beneficial? When and why does it become detrimental? Can we transform negative into positive stress, and for that matter, prevent positive stress from turning negative? Is negative stress inherently, irrevocably negative? These are questions that lie at the very heart of Self-Reg.

Scan through the literature on stress and you find one group extolling its benefits (see, for example, McGonigal, 2015; Abbott, 2016) and another warning of its harmful effects (see, for example, Benson, 1975; Maté, 2004). This distinction was first made by Selye (1956, 1976) when he differentiated between eustress and distress. Eustress is physically as well as psychologically and emotionally beneficial (Sapolsky, 2014, 2015), while distress is potentially damaging to the body as well as the mind (Sternberg, 2001; Beauregard, 2004; Seligman, 2012; Fogel, 2013).

The predominant approach to dealing with this complicated issue has been cognitive: that is, following the idea that how a stressor is perceived determines whether it is experienced as positive or negative (Everly & Lating, 2012; Solomon, Smith, Robins, & Fischbach, 1987). The emphasis has been on reappraisal (Cognitive Behavioral Therapy) or non-appraisal (non-judgmental mindfulness [see Kabat-Zinn, 1990]). Both strategies have been shown to be effective. But more is needed.

Your physiological reaction to a stimulus often determines how you perceive it. Someone with a heightened sensitivity to noise might find a cocktail party overwhelming, while someone with a low sensory threshold finds the same experience invigorating. What is more, reappraisal or non-appraisal do not help those who, for example, are sent into fight-or-flight by repetitive low-frequency sounds (Willis & Malcolm, 2016). But what is especially significant about conditions like misophonia, or the effect of heightened anxiety in general, is the impact of energy and tension on sensory reactivity.

In other words, where one sits on the Thayer matrix (see Figure 1) is central to the discussion of “transition conditions.”

Not only does the state one is in profoundly influence how a stimulus is experienced, but the reverse is also true: that is, the stimuli you are subjected to profoundly influences the state you are in. One and the same stress can be experienced as positive if you are in a high energy/low tension state (HE/LT) and negative if you are in a low energy/high tension state (LE/HT). Hence it follows that the better one can identify and reduce the stressors that lead to LE/HT, the better one can manage how a particular stress is experienced.

The big complication in all this is that to exercise these self-regulation skills involves not just physical or emotional stress, but also cognitive, social, and prosocial stress (Shanker, 2016). These multiple stresses are inextricably bound together, constantly impinging on and intensifying one another. Hence the Yerkes-Dodson Law (see Figure 2) is a function of all five of the major stress domains addressed in Self-Reg.

In Daniel Goleman’s (2012) terms, the far-left side of the curve represents “disengagement,” the far right side represents “frazzle,” and the midpoint represents “flow.” Flow denotes a balance between energy expenditure and recovery (sympathetic and parasympathetic processes). Too much stress leads to an excessive buildup of dopamine and cortisol (Csíkszentmihályi, 1990; Landhäußer & Keller, 2012), which in turn triggers limbic braking: the reason why performance declines markedly (Shanker, 2017).

What this means is that managing transition conditions has to be looked at through a holistic lens. That is, we need to identify the major stressors that are contributing to a state of hyper-arousal. Any particular stress that stands out needs to be understood within the complex of stresses the individual is dealing with (see “Hide and Seek,” this volume). To transform negative into positive stress, or prevent the reverse, one needs to look at all five domains of stress, identifying both hidden and overt stressors, as well as the interactional effect of stressors on one another (Shanker, 2016).

Goleman, D. (2012). The sweet spot for achievement: What’s the relationship between stress and performance? Retrieved from https://www.psychologytoday.com/blog/the-brain-and-emotional-intelligence/201203/the-sweet-spot-achievement

Shanker, S. (2016) Self-Reg: How to help your child (and you) break the stress cycle and successfully engage in life. Toronto: Penguin Random House Canada.